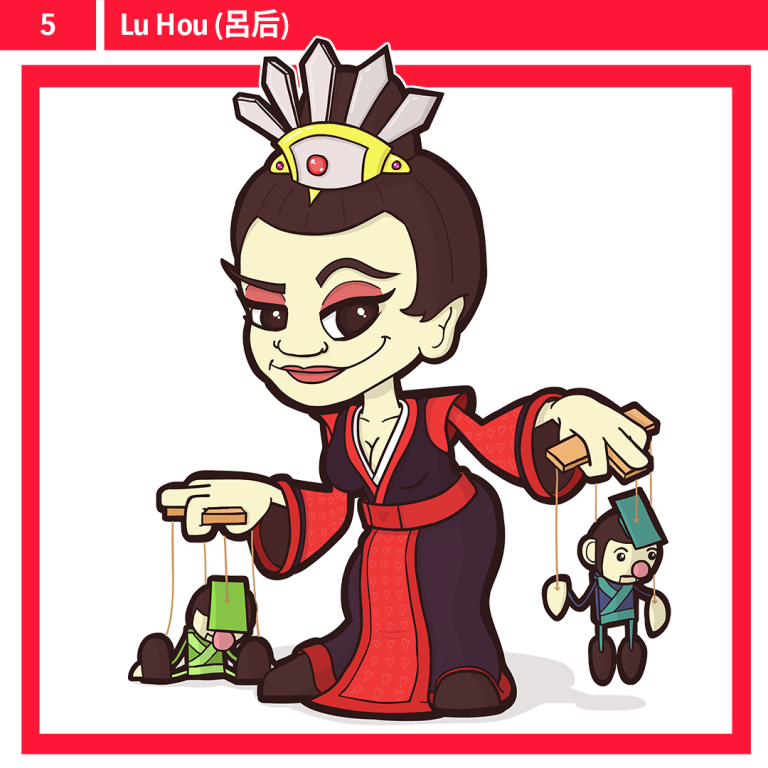 Following her successful time controlling her (newly deceased) son and former emperor, Lu Hou wasted no time finding a new impressionable young mind to put on the throne and manipulate.

Since previous emperor Huidi had fathered no children himself, Lu Hou had encouraged Huidi’s wife to adopt a child instead to continue the dynasty that way… making sure to kill the child’s blood-related mother after doing so. This backfired when this young emperor found out both the adoption and murder, and vowed revenge on his fraudulent ‘family’.

How would Lu Hou deal with this young emperor gone rogue? Very easily it turns out. She locked the child in the palace dungeon explaining to palace staff that “The emperor had developed an incurable mental illness” and needed to be put out of his misery and killed. Luckily, Lu Hou had brought back-ups; and replaced his spot on the throne with another of Huidi’s adopted sons, continuing her time in the dynasty’s driving seat uninterrupted.

While these puppet emperors held power, Lu Hou began an attempt at gaining power in other sections of the palace; placing more and more of her own family members in prominent positions. Upon her death in 180BCE, the Lu family’s monopoly on politics continued, leaving the puppet emperor outnumbered and entirely powerless against their political strength.

Could this be the second dynasty in a row to fail after just two legitimate emperors? It turns out that, no, there was a way to take back control of the political system for the Han families. Those in the palace loyal to the Han family joined together and carried out an effective, but not very subtle plan: murder of the entire Lu family line, including the puppet emperors. That did the trick.

Now, with a mostly murdered power structure and a with a legitimate heir of the last accepted Han emperor almost impossible to pin down, where can the Han Dynasty go next? The answer is by going back to the roots finding one of the few sons of Gaozu that Lu Hou hadn’t managed to murder in their infancy. Han Wendi.